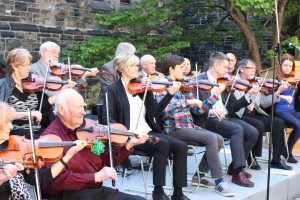 Saturday May 16th marks Canada’s 1st National Fiddling Day and fiddlers across the country will be celebrating their music at jam sessions and public events. Our oldest boy is a fiddler and he will be out at a few special events in Ottawa. So, our whole family will be celebrating fiddle music tomorrow on what is Canada’s inaugural day respecting this traditional music and the impact it has had on its people.

Alexander will play at a fiddler’s session from 10 to 11 a.m. on the Ottawa River at Deschenes Rapids (park entrance at Woodroffe and the Parkway). Later tomorrow, he will be in Richmond to compete in the Ottawa Fiddle Competition.

Also, Saturday from 1 to 2 p.m., Dennis Harrington will host a commemorative show on 98.7 Valley Heritage Radio out of Renfrew. You will hear the best of the Ottawa Valley and can tune into the show live over the Internet: http://valleyheritageradio.ca/listen-live/

This day is a big thing for fiddlers – it is a big thing for one young fiddler. Over the last few months, Alexander has been involved in advocating for this national recognition of fiddle music. These efforts were capped with a very nice reception on Parliament Hill on Wednesday evening – a “kitchen party” hosted by Senator Elizabeth Hubley (photo shows some of the fiddlers performing at the reception).

For background information on National Fiddling Day here are a few links to postings on Alexander’s website as well as in the By George Journal.

Be sure to enjoy the music tomorrow!

By George Journal post:
Towards a National Fiddling Day

A poem by Chris George
The Fiddler’s Smile

A parting observation
Take a moment (consider this)

Here to the fiddlers rosining their bows!

2 thoughts on “Of National Fiddling Day”