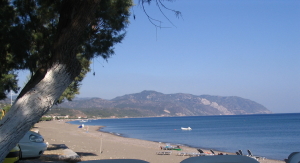 If you have been preoccupied with the thrills of the Olympic Games, or with the U.S. presidential race to the bottom, you may have missed the recent dramatic happenings on a small Aegean island, Lesbos. The daily drama and the endless stories of compassion and hope are amazing. On this island, our faith in mankind can be renewed; faith personified in simple acts of kindness and understanding that span race and religion.

With the post-failed-coup crisis unfolding in Turkey, there has been a new wave of refugees wash ashore the beaches of Lesbos. Or, more accurately, hundreds of new souls have been plucked from overcrowded rafts into the arms of Greek fisherman and coast guards to be taken in by the people of this generous Greek island.

.
Through the past year-and-a-half hundreds of thousands of refugees have sought escape and arrived on the island of Lesbos. Today, to mark their Herculean efforts, there is a eerie monument that continues to grow… A Cemetery of Life Vests But Not Lives.

Unlike islands elsewhere, Lesbos discards thousands of life vests every day. They litter its eastern and northern shores, coloring the beaches or floating aimlessly on the azure waters. For months now, they have been routinely collected by municipal workers and volunteers and unceremoniously discarded in a municipal dumpsite near the town of Molyvos. Each life vest was worn by one of the more than 450,000 refugees, asylum seekers, and migrants in 2015 alone who made the sea crossing from Turkey to this Greek island. Each tells a different story, but almost inevitably, it is a story of fear.

The people of Lesbos tell another remarkable story that demands to be understood by all who wish to help the Syrian displaced and desperate. This reflection of a Greek fisherman is a stark and simple message.

“I remember I was a young boy, and I saw Iraqi men arriving on small rubber boats with paddles,” Pinteris says while pulling his fish-laden nets out of the water. “We wondered, ‘Why are these men here?'”

Like most of the people in this small and conservative village, Pinteris initially viewed the arrivals as an invasion. But now, in light of recent events, even some of the most hardened Greeks on the islands have changed their minds.

“After having experienced what we have this year, with women and children in the water screaming for help, many people’s world views have changed,” Pinteris says.

From the fishermen who lift them from the rafts, to the YiaYias who feed and care for their disoriented guests, the people of Lesbos are the finest example of human compassion; they are the essence of humanitarian spirit. So much good has come from their acts of kindness… and today Lesbos islanders persevere under the strain of economic and political realities.

Learning to Love the Sea – After surviving traumatic journeys, children of refugee crisis are getting swimming lessons

Life on Lesbos: residents tell us what its really like.

UN News: “If tiny Lesbos can do so much, surely others can do more.”

There is little wonder that the Lesbos people have been nominated to be awarded a Nobel Peace Prize for their acts of kindness. Take a moment and watch these moving YouTube videos.

The Greek Grandmother and Fisherman

On a small Greek island where they have so very little to give, the Lesbos islanders give their all. Their acts have truly provided renewed faith in humanity.