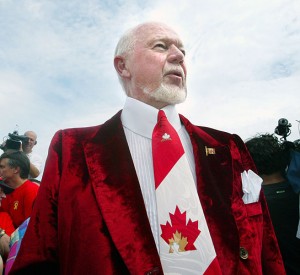 This is from the department of “Only in Canuckistan.”  Straight in from left field, we have two aspiring PhDs claiming that Don Cherry is warping Canadians’ minds and altering our national identity.

In their review of Hockey Night in Canada’s Coach’s Corner, the brains of University of Western Ontario observe that Cherry goes unchallenged when making his statements about Canada’s military. By presenting “an understanding of Canadian identity through the lens of hockey analysis,” Cherry is promoting a “tougher”, right-of-centre national identity – one that doesn’t reflect our diverse country.

Co-author John Nater states: “His view of Canadian identity would appear to be a limited one, focused very much on traditional Canadian immigration from western Europe and the United Kingdom. The concern is it does exclude a large segment of the population . . . from non-traditional ethnicities. He is entitled to represent these views and put out his understanding of (national) identity, but the challenge with his position is they are not challenged. He is presented as a hockey commentator and there’s no challenge function to what he says on non-hockey related issues.”

The authors of the study have gone so far as to suggest that the popularity of Cherry may be indicative of a shift in the Canadian politics. Nater observes: “This very much reflects a lot of the things that are happening politically. You look at Toronto (with the election of Mayor Rob Ford), you look at nationally now, it seems to be a shift to more of a small-c conservative point of view. I think Cherry reflects that — going to traditional values, the support for the Canadian Forces, the support for a strong questioning of patriotism or one’s love of country.  It’s very much a strong view that Canadian identity rests on a tough image, a support for the troops and (goes) back to an older era — an idealized era — that looks at how you see Canada being a traditional British Anglo-Saxon country.”

Here are some of the findings from the study that looked at every Coach’s Corner segment from the 2009-10 NHL season:

Seriously, only in Canuckistan would we be criticizing someone who honours and is vocal about his support of our troops…. Don Cherry’s Coach’s Corner is very popular, perhaps iconic in our country. Canadians love of Grape’s frankness speaks for itself.

The PhDs’ work is entitled The Wrath of Grapes: Don Cherry and the Militarization of Hockey. Read more about this study here [SOURCE]: