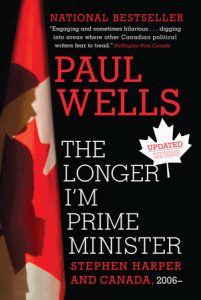 Paul Wells book on Stephen Harper’s politics – The Longer I’m Prime Minister – is a must-read for anyone wanting to understand the man and his modus operandi in office. Here are ten quotes extrapolated from Paul Wells’ book – but, to get an insightful glimpse into the Prime Minister, get the book – read it.

In Fall 2014 Chris George attended a breakfast where Paul Wells spoke – and here is the By George Journal post on that address.