On this day Hellenes cry out “Oxi!”

Here is background on the genesis of this historic day in Greece and what it means for Hellenes in Canada and around the world.

First, here’s a little local Canadian history…. in 2016, Ottawa Mayor Jim Watson received a delegation from the AHEPA Ottawa Chapter to celebrate “Oxi Day”.  Read more about the honour the Mayor bestowed upon Greek-Canadians in Ottawa and across the country: 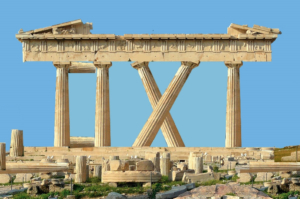 Oxi Day is October 28 on the calendar, a national holiday in Greece and recognized by Greeks around the world as a day to remember Hellenic values and the courageous words and deeds of those who fought for Greece and all of democracy in the early, dark days of WWII.

AHEPA Ottawa Chapter wishes to raise the attention of this day to Ottawa residents, those of Greek heritage and all of our community’s citizens. Oxi Day is a day to reflect on the strength of the human spirit when confronted with an impossible situation; and to appreciate the price that, at times, must be paid to stand up for one’s principles, values, rights and freedom. (More on the Order of AHEPA.)

On the Genesis of Oxi Day

Oxi Day commemorates the anniversary when former military general and Greek Prime Minister Ioannis Metaxas said, “No” to an ultimatum made by Italian Prime Minister Benito Mussolini to allow Italian forces to occupy strategic locations in Greece. In response to Metaxas’s refusal, Italian troops attacked the Greek border. On the morning of 28 October, the Greek population took to the streets, shouting “oxi” (pronounced O-hee).

The superior Italian army had initial success but the Greeks pushed the Italian army back into Albania.  This was the first land defeat of the Axis forces in WWII, and it provided a ray of hope for democracies worldwide.  Churchill wrote “Greeks do not fight like heroes; heroes fight like Greeks.” Mussolini was embarrassed and had to call Hitler for help. Greek and British forces continued to fight and decimate German troops, until Greece surrendered six months later.

This stand against the Axis Forces was truly remarkable and is recorded as the greatest resistance against Nazi blitzkrieg in WWII. Greek and later British forces withstood 219 days of invading forces. In total 13,696 Greek soldiers died before the Nazis raised the swastika flag over the Parthenon. (In comparison, France fell in 43 days; Poland in 30; Belgium in 18; the Netherlands 4; and Norway in 7.)

Hitler observed: “For the sake of historical truth I must verify that only the Greeks, of all the adversaries who confronted us, fought with bold courage and highest disregard of death.” The extent of casualties in Greece caused Hitler to delay an attack on Russia, thus subjecting his troops to harsh winter conditions and contributing to the defeat of Germany.